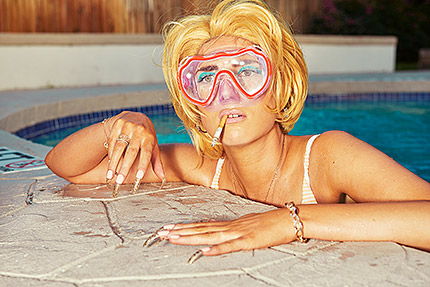 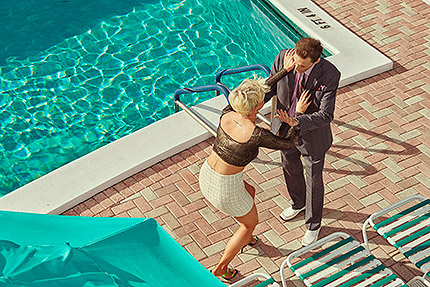 “Contexts often indicate our meanings so clearly that we do not even have to say what we mean in order to be understood.’ With The Tourist Kourtney Roy once again distinguishes herself as the virtuoso of context creation. 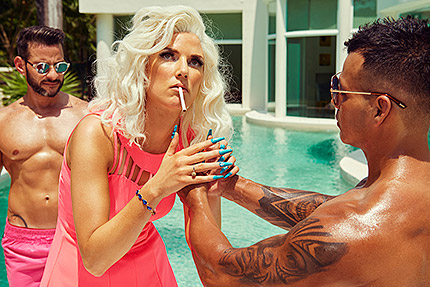 Holidays should be relaxing, but when you’re the tourist looking for a husband, the holiday soon becomes hard work. You need to keep your tan topped up, those fingernails flawless and your choice of clothes co-ordinated. You must ensure your body is well-honed and toned, in order to sport designer beachwear, fashioned from faux-snake or faux-alligator or faux-leopard. Faux is not out of place in a world of fakery where flamingos, starfish, dinosaurs and talon-like nails are all far from authentic. 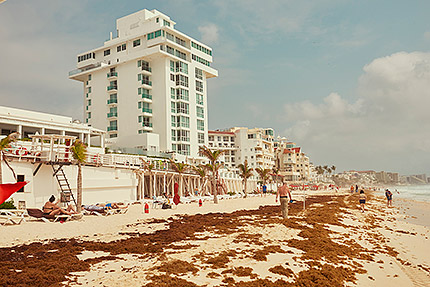 But amidst the imitation, we catch glimpses of reality: real cruise ships, actual beaches, genuine seagulls and an authentic alligator. Thankfully, the tourist wears glitter and spangle, so the scaly hatchling is safe, unlike his ill-fated ancestors, destined for the luxury market. 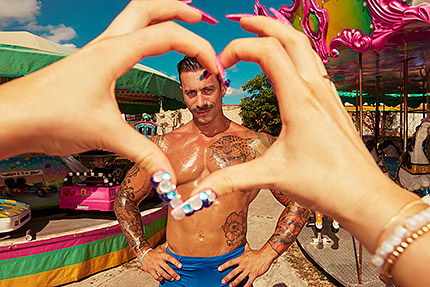 The Tourist contains all the Roy hallmarks we love and expect: auto-portraiture, a filmic approach, her characteristic colour palette, as well as a tension between the witty and the sinister, the conventional and the unorthodox, the glamour and the sleaze. 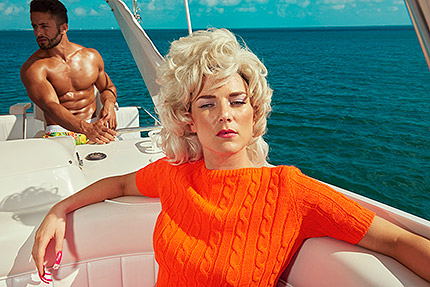 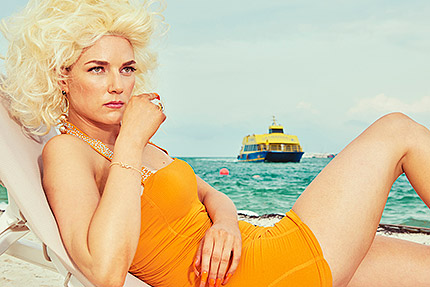 And we are not disappointed to find that the boundaries between fantasy and reality are blurred. But what elevates The Tourist is the exceptional crafting of the point where we leave our extensional world and enter her intensional one. Roy creates a visual metaphor for a world we believe we know. Yet, through her clever use of juxtaposition, we realise that it is not the world we think it is. The details are intricately interwoven, such that the scenes are both familiar and alien. The snorkelling mask above a mouth from which a cigarette dangles, the pool boy’s mop casually abandoned near a mock temple; fluffy slippers in close proximity to water are never a good idea, neither are high heels on slippery poolsides. 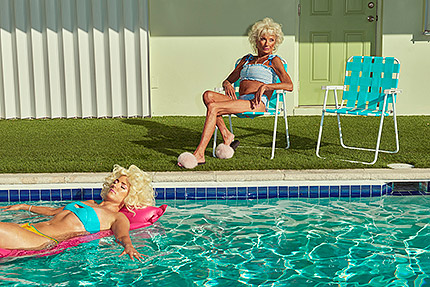 The net effect is that Roy hits the holiday nail bang on the head. Research shows most people enjoy the anticipation and recollection of a holiday more than the actual experience, which is why the holiday snapshot is so important. It removes the disappointments and creates a rose-tinted memory of pleasures we didn’t have. Roy turns this upside down, such that we are taken to a place of apparent glamour, but which, in reality, is much closer to our own experience: one-night stands passed off as holiday romances; boredom that leads to sinking a bottle in a way that gives new meaning to the poolside cocktail; ice creams that melt into the fake jewellery; a feeling of disquiet, as if someone is about to yell “Shark!” and not mean the turquoise plastic variety.” 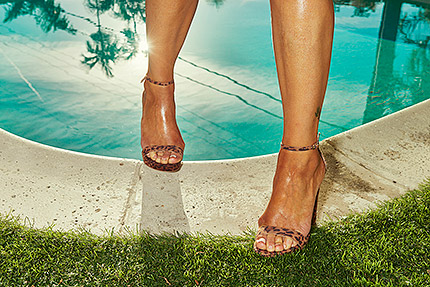 Roy (b.1981) was born in the wilderness of Northern Ontario, Canada. She holds a degree in media studies specializing in photography from the Emily Carr University of Art and Design in Vancouver, Canada. Roy is currently based in Paris, France, where she has been exhibiting her work nationally and internationally for over 10 years at such events and venues as Le Bal, Paris, the Musée Elyséé, Lausanne, The Head On Photo Festival in Sydney and the Moscow International Photo Biennale.
She has been the recipient of numerous awards and grants, including the Prix Picto (2007), Emily Award (2012), Carte Blanche PMU (2013), The Prix Elysée Nomination (2014) and The Canadian Council for the Arts artist grant (2015). Several books have been published on her work, including Ils pensent déjà que je suis folle (Editions Filigranes, 2014), Northern Noir (Editions La Pionnière, 2016), and California (Editions Louis Vuitton, 2016).